A wizard and alchemist, Ivanova Alanik was one of the first to bring the Greek magical practices of Alchemy into the Slavic world, teaching hundreds in the ways of transmutation, and spiritual & elemental binding.

Eventually, however, as Christianization was taking hold, Ivanova was outed as a heretic, and punished severely for his heathen "dark magic" practices. Ripped out were his eyes, and a massive cross was branded onto his face. His current students were taken away from him, and his wife burned at the stake before him. Luckily, his children escaped before the crusaders arrived, and lived on, though.

In one final act of defiance and pure fortune, Ivanova had remembered two things - that which he had learned of the Azot Stone - a forbidden Dark Alchemical ritual that required a sacrifice of 99 souls to form - and the archaic texts he had read of the Dominion Game. And so it was, that to his luck, the game was in progress.

By sheer will and fury alone at the death of his wife, his blinding and branding, and the taking of his students, he manifested a cartic spirit, that which would come to be known as the blind alchemists' "Diamond Eyes," to aid him. Around him, a shell of diamond had appeared, and from the sky rained a storm of razor-sharp diamonds, tearing the crusaders around him to shreds, and thus providing enough souls to create his Azot Stone. Or so, he had thought it would be. The men surrounding him had only provided 98 souls, so, he sent his Diamond Eyes to tell his escaped lineage of the great power that was to be found in the town of Katastomya, where the massacre had occurred, and continued to complete the ritual of Azot Stone creation, using himself as the 99th soul.

Ever since, the Alanik bloodline has been made a target for those in the occult fields, as an Azot Stone is an immensely powerful thing, though the Katastomya Azot Stone has been lost for ages. 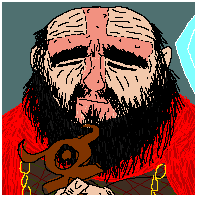